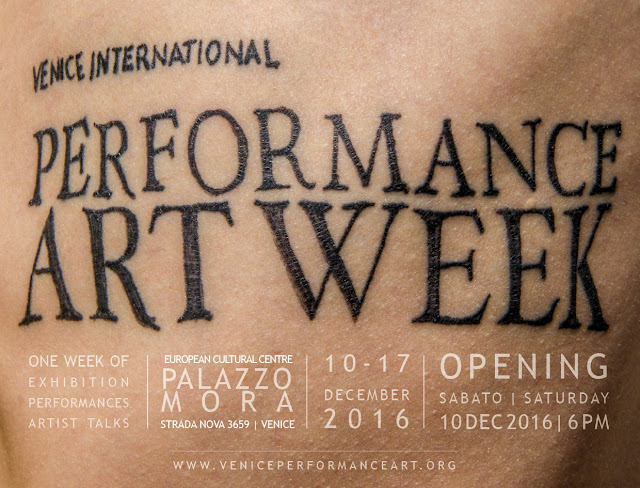 The live art exhibition project dedicated to contemporary performance art showcases in its third edition works of over 80 international performance artists from around the globe, some of which are presented in cooperation with prestigious cultural institutions and foundations. Pioneers of this art discipline exhibit and perform alongside established and emerging artists, reflecting influences and current tendencies in the field.

The project consists of an exhibition of performance installations, photographic and video documentation as well as vibrant program of live performances, talks, screenings and meetings with the participating artists, researchers and curators.

For this third edition with the focus Fragile Body – Material Body, the works present physical, mental and spiritual bodies as primary material of artistic expression, aiming to investigate a wide range of concepts pertinent to the art forms of performance art, Live art and Body Art, such as: authenticity, living entities and their relations towards one another; fragility and vulnerability of the individual and of the social relationships; mental and spiritual states rendered through liminal physical and corporeal manifestation; as well as encouraging questions around the post-organic transformations and mutations to which we subject the human body.

The presence of human beings in this world is always more than a temporary condition: the communication that can be triggered between artists and the audience is an essential element. The topics addressed during the week will relate to the need to look at social relations and the lives of individuals with greater care.

Due to the specificity of this edition's theme Fragile Body – Material Body, the live performances and works on display will also seek to provide reflection and further considerations on how to find meaningful mechanisms to foster positive change through contemporary culture and art in a vital way.
The ART WEEK BLOG will be updated daily during the week with reflections, features and interviews by our residence writers.

The word "fragile" is often associated with the locution "handle with care": this is precisely where the III VENICE INTERNATIONAL PERFORMANCE ART WEEK heads, this time around, raising awareness on the precariousness of life through performance art. It is a call to action – to practice a more mindful, careful and respectful behaviour towards the Other, in the words we say, thoughts we think, and things we do. Toying with the paradox of the strength and fragility of our physical bodies, the first requirement here is to step beyond mere appearances and limitations.
Fragility does not only imply negative connotations – it is rather a continuous memento mori for its existence in thoughts, convictions, systems, beliefs, and a reminder to live with full awareness of the complex ephemerality of our times, taking care of all that surrounds us, near and far.
Through the physical body (the primary medium of the practice of performance art), human relationships and their inherent frailty are considered. With frailty comes the potential for destruction and with destruction comes the potential for growth: of the individual, social, political, spiritual and ethical systems.
Proposing de-construction as a necessary tool for development, the word "care" implies real engagement in dealing with an emergency, or to possibly evaluate a given situation from all sides, therefore also reflecting on its potentials and value. Eventually, depending on the conclusions of these evaluations, to "handle with care" can either mean to protect that which is fragile or to courageously engage in transformation, to the point that the only way "to deal with a world so evidently and increasingly unfree, it is to become so absolutely free that our very existence is an act of rebellion... for rebellion cannot exist without a strange form of love." (Albert Camus)

The Thesaurus defines the term "material" as an alternative adjective for the body of a human being, and many historical references in literature indicate the material body as the door to reach the spiritual body, that which has to be transcended in one way or another to reach our spiritual matter.
Reflecting upon the perception of our material bodies to understand and eventually reinforce the spiritual one, is a central question in Oriental religions as well as in the Holy Thursday, when in the garden of Gethsemane, finding his disciples in sleep, Jesus rouses them and warns them by saying: "The spirit indeed is willing, but the flesh is weak." (Matthew 26:41).
Regardless of the Christian connotation, this sentence is relevant because it states that if the flesh is weak (pars constituent of our material body, which is fragile and destined unavoidably to caducity), the spirit is "willing" (in Greek πρόθυμον = prothemon), desirous to do what is right – that 'right' that we feel, perceive, is also necessary for an ethical formation, as Kant argued in The Critique of Practical Reason (1788).
Influential philosophical investigations (by Aristotle, Hegel, Jung, Watts, to cite a few) that have inquired into the nature of being focusing on the phenomenology of the spirit, up to the latest holistic perspectives and neuroscience researches, seem to agree on the fact that the parts of something are intimately interconnected and explicable only by reference to the whole, and that it is our material body that tells us (of the need) to nurture our spirit and tune in to its true desires.
In other words, it is like saying that if the spirit tends towards that which is good, true, complete, beautiful, and attainable because of our material body, the continuous metamorphoses that the material body undergoes throughout life (because of its inevitable organic decay, which still lasts long after death), might be even interpreted as evidence of a transcendence from all that is material, and proof of the life-giving shape of the being (itself).
All this can be certainly refutable. Every proposition has its Achilles' heel because "all the propositions say the same thing, to wit nothing" (Ludwig Wittgenstein): the language only comes up to where it can get for "the limits of our language mean the limits of our world." (LW)
What does it mean for a being to be? What is existence? What can be said to exist?
Everything we see could also be otherwise. Everything we can describe at all, could also be otherwise. Perhaps we humans are just a cosmic accident with a very short life span and the world we live in is "all that is the case. This is how things stand." (LW)
SO THEN: WHY PER•FORM?

Perhaps to act and give essence to what cannot be said, accepting, taking, contrasting, enduring, forsaking, forgiving, passing over or through – with dignified silence – what we cannot speak about but we're aware of, and with it all that is elusive and illusory.
Artists, everyday people – because it makes no difference and there is no diversity – we appear just for what we actually are.
We all mirror each other carrying within us our own ideals, ideas, sufferings, loves, fears, dreams, sensualities and ironies as pure treasures to express and share, shaping together a time-based social sculpture: a creative temporary community which reflects freedom and respects it.
Perhaps to celebrate life. 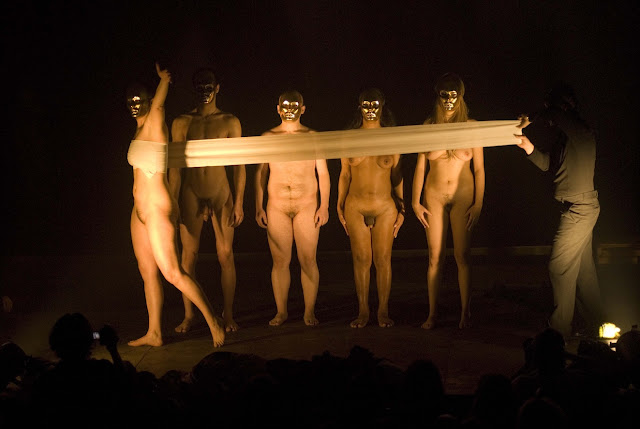 Kyrahm + Julius Kaiser is an Italian artist couple based in Rome, with individual expertise in the fields of visual and performance art, video art, film and LGTB activism. Upon their encounter, they started the project Human Installations, a research comprising contemporary art, live art and avant-garde theatre. In a constant dialogue with cinema, they create works of video art, documentaries and films. Their interest lies on the social function of the artist, existential dynamics, the role of identity, and the experimentation along mental and physical limits and gender roles.
At the VENICE INTERNATIONAL PERFORMANCE ART WEEK, they present two live performances:
ECCE (H)OMO, Guerrieri (2016): "With humbleness I joined these people to expose their bodies and souls, voluntarily presenting themselves and their lived lives. A mother without the right on her baby girl, a woman loving her girlfriend, the courage of the disabled and the pride of age and illness." Every intervention is inspired by a piece of video art in progress: stations of actions on human fragility that involve public performances, as well as intimate moments of the everyday. Written and directed by Kyrahm.
Human Installation I: Gender Obsolenscence (2010): The biological sex as skin. Gender as the sense of being. Path, crossing and transition. Every naked body a story. Distress is tiring, and the flesh is material to be shaped. The rite of dressing up as a turning backwards: the self is revealed. Written and directed by Kyrahm + Julius Kaiser.
Further Kyrahm and Julius Kaiser present on exhibit the performance film (A)mare Conchiglie (2015) and in presentation the short film by Claudio del Signore Drag king, Julia's Dream (2015) as well as the documentary Oltre il corpo (2016), featuring VestAndPage, Fioramanti, Kyrahm, Gonzalo Rabanal, Collettivo Cercle and Ron Athey. 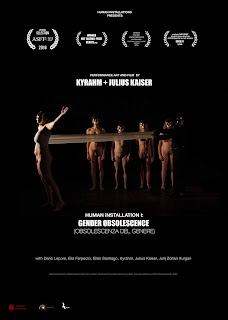 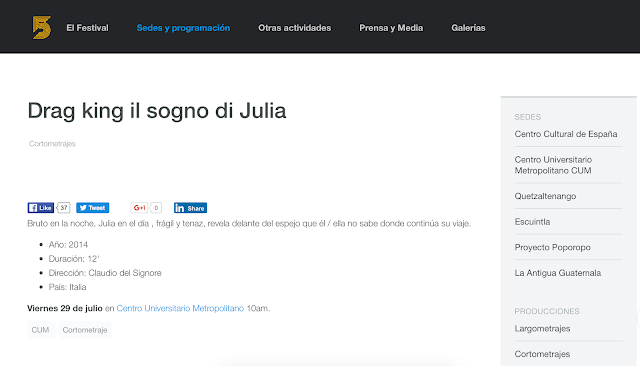 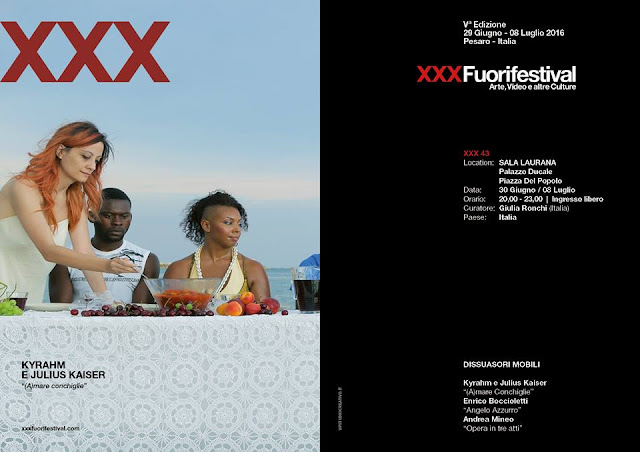 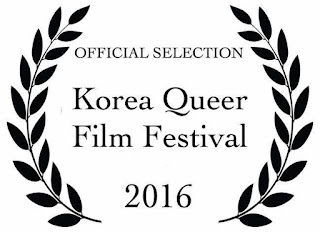 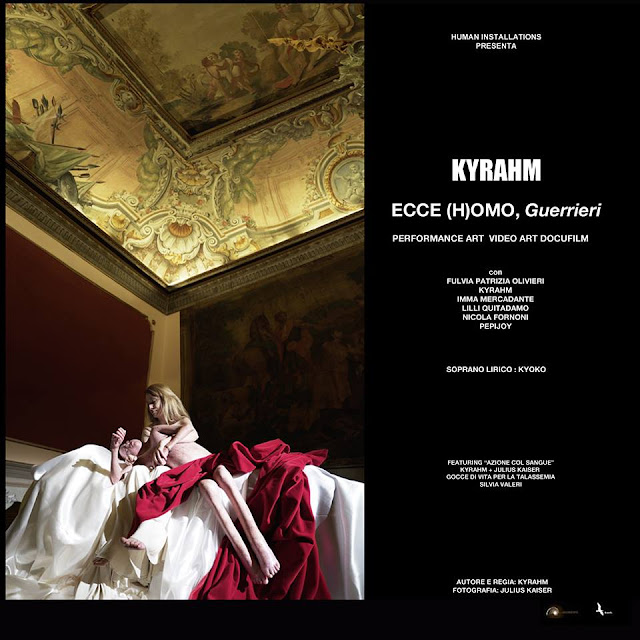 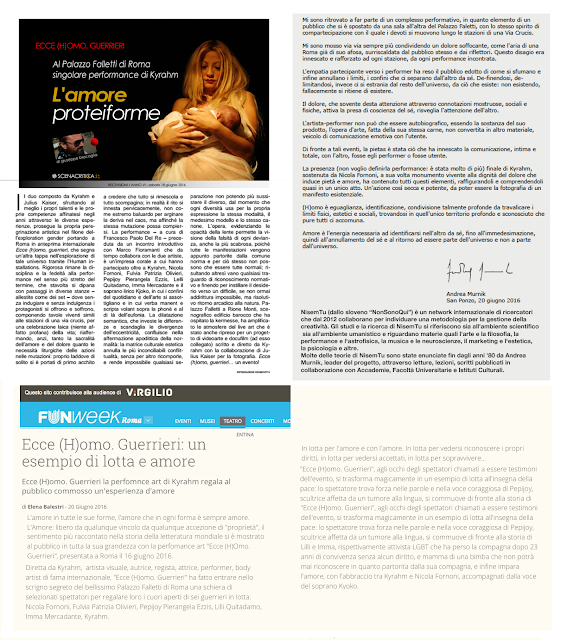 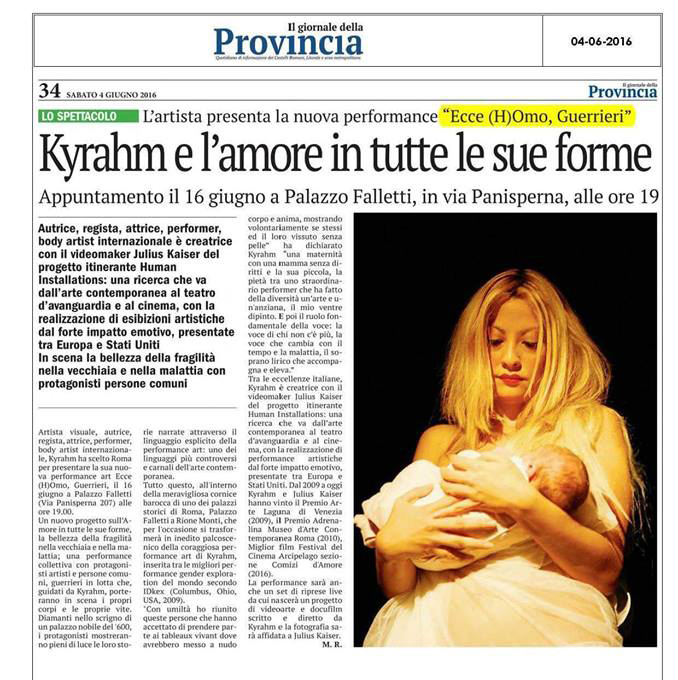 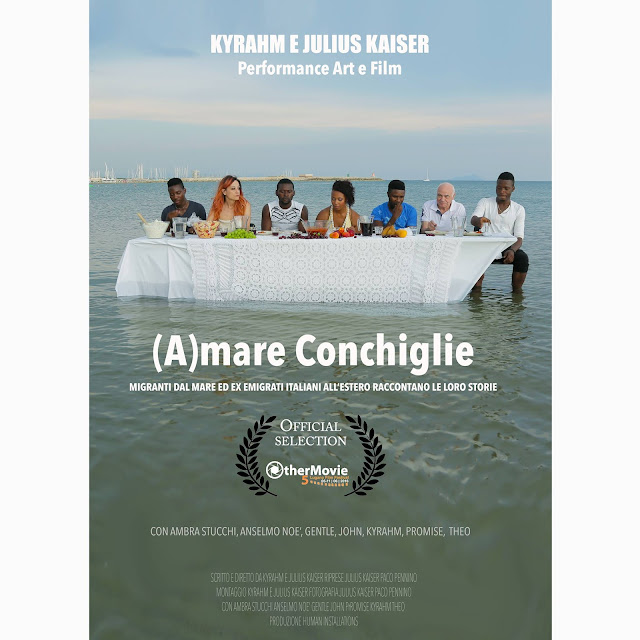 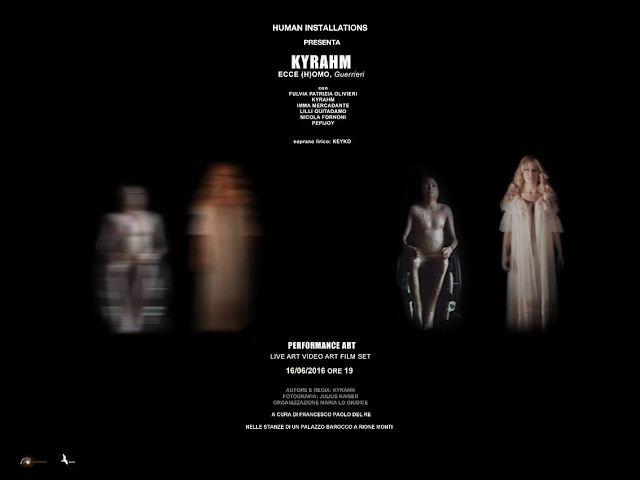 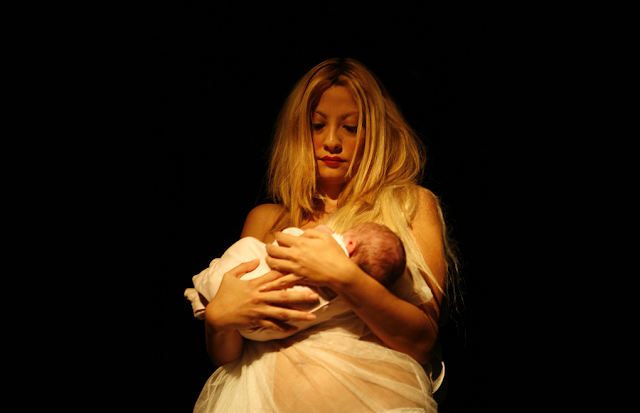 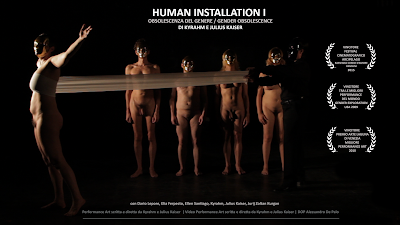 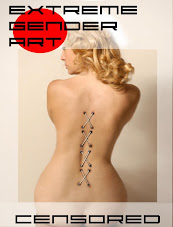